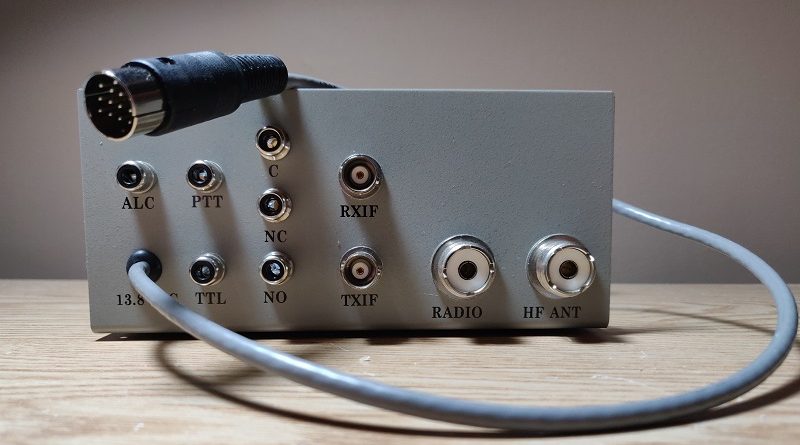 I’ve been using the IC-7300 for both 6m and the 1.35m (222 MHz) bands, using a DEMI L222-28HP transverter for the 1.35m band. To interface the transverter with the IC-7300 I bought a used DEMI TIB (Transverter Interface Box) a while ago. This neat little interface box can be used to use any transverter with radios, like the IC-7300, that do not offer support for transverters. It provides for antenna and PTT switching, as well as negative voltage to control the power output of the transceiver through the ALC connection.

The DEMI TIB interface has a single switch, a power switch. When the power is turned off, it’s like the interface isn’t even there. The HF/6m antenna is connected to the radio and the PTT switching through the interface is disabled, as well as the negative ALC voltage. When the power is turned on, the radio’s antenna is switched to that of the transverter, and the PTT and ALC voltage is now controlled by the interface. The interface allows for many configurations depending on the transverter you are interfacing with. I won’t go into details here as that is outside the scope of this article.

After using the DEMI TIB interface for a while, it occurred to me that it should be able to have the interface turn on and off based on the band selected on the radio using some additional circuitry. The IC-7300, and other Icom radios, provide band information on an accessory port. On pin 5 of the 13 pin accessory port on the IC-7300 a voltage appears depending on what band the radio is tuned to. For the 10 and 12m band Icom specifies a voltage between 2 to 3V on this pin. Pin 1 provides an 8V reference, and pin 8 provides 13.8V at 1A. Using the latter pin to supply the interface and additional circuitry means that we can eliminate one power supply. It also means that when the radio is turned off, the interface will be turned off as well.

To check the voltage on pin 5 of the accessory port to see if the radio is tuned to the 10m band we can use a window comparator circuit that uses the 8V on pin 1 as a reference. The output of this circuit will be a logic low when the input voltage is within two preset values (the window) that can be set with multi-turn trimmer potentiometers. The output will be a logic high when the input voltage is outside of the window of preset values. The output can be used, after inversion of the signal, to drive a transistor circuit that will turn a relay on and off. This is the schematic of the circuit I built to accomplish this:

I realize that there are ways to eliminate the inverter transistor Q1, but I didn’t bother with that refinement as I intended to build this only once.

As you can see in the schematic, I put one relay contact in series with the power switch of the DEMI TIB interface. This preserves the function of switching the interface on and off with the power switch. I repurposed the “C”, “NC” and “NO” RCA jacks on the back of the interface box to switch the PTT signal from the radio with a second set of relay contacts. This allows me to switch the PTT signal between the transverter and a HF/6m amplifier.

If I want to operate on 10 or 12m, I simply turn off the power to the interface box. This will also allow me to use the amplifier on those bands as well.

I built the switching circuit from parts in my junque box on a piece of perfboard and used some double sided tape to mount it against the inside of the front panel. 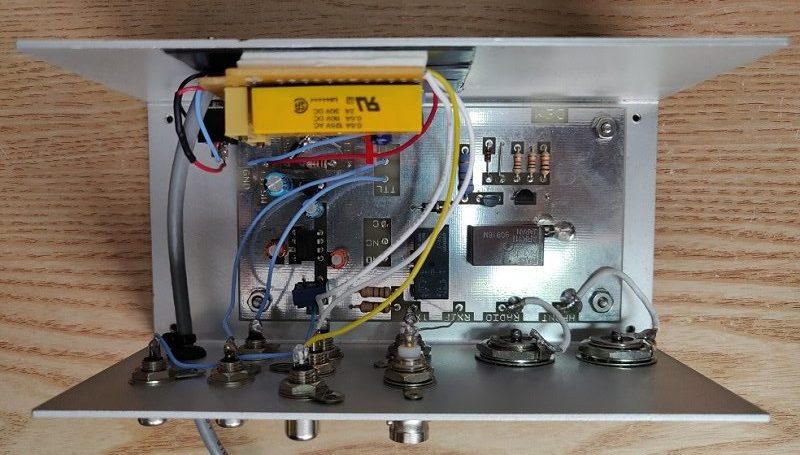 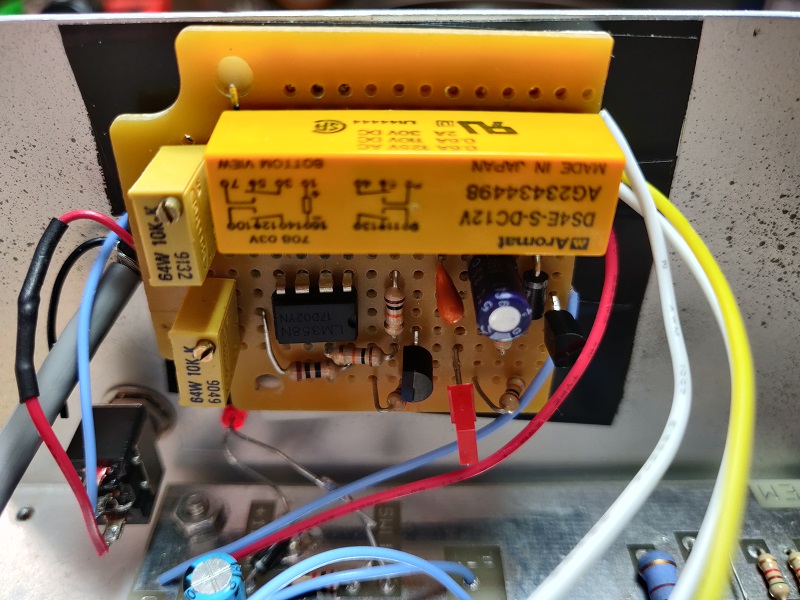 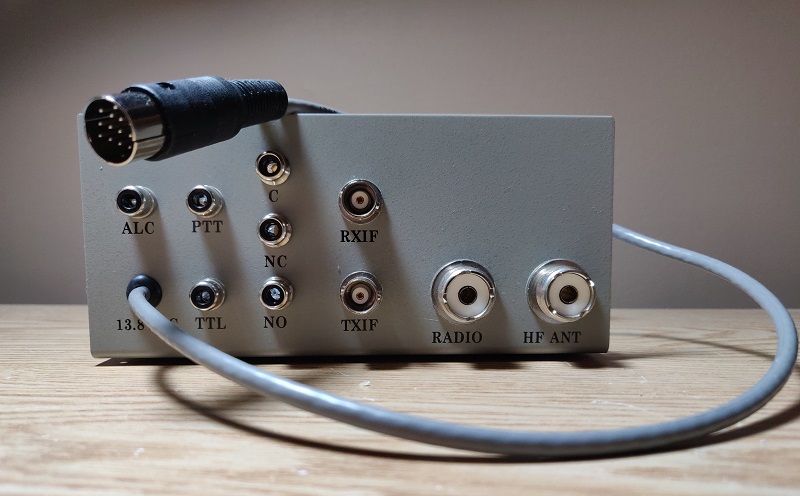 The big advantage of this circuit compared to other, perhaps more complex, solutions is that it doesn’t require the use of a CAT port so that you can still use that port for logging software like N1MM+. When you change bands on your logging software, the interface will follow accordingly.

This little circuit I added to the DEMI TIB interface really helped me keeping things straight in the heat of a contest when it is easy to forget to flick a switch when you want to change bands. The fact that it follows band switching though the software really helps to automate that part of station and allows for single click band switching.